He loves to help companies of all sizes, from big Fortune 100 companies to start ups, embrace the online marketing world and help to grow their business.

Over the past decade, I have been spot checking here and there to see what search terms have the most volume in the Boston area and since I am a local Boston sports fan I like to see which teams and players attain the most search volume. It is also fun to see which restaurants attain the most traffic too since I am a foodie. But I am sure it is not surprise that over these years, a few names have always been on top like Tom Brady, David Ortiz, Paul Pierce, the New York Yankees and Gronk of course.

Turning the clock back to 2017, here’s a look at what us Bostonians had the most interest in according to Google search. The top trending term in Boston in 2017—a year in which the Patriots won the Super Bowl, and the Red Sox won the AL East before giving manager John Farrell the boot—was the Celtics. Of course, the team wasn’t a snooze-fest by any means this year, and perhaps the buzziness of the squad’s on- and off-court news bolstered how many people were looking for information about them. From a dramatic run to the Eastern Conference Finals and trading away Isaiah Thomas to picking up Kyrie Irving and losing Gordon Hayward to a rough injury, there were lots of stellar reasons to Google the Celtic’s. It will be interesting to see how search trends rise for Jayson Tatum and Kyrie Irving now. For the record, Hurricane Irma and Aaron Hernandez were the second- and third-most popular searches, respectively, and Tom Petty and the New York Yankees round out the top five.

Now as we are nearing the end of summer, it’s back to school time and the Patriots have had their second pre-season game; so let’s use our google keyword planner to see who comes up on top in Boston right now. Let’s first take a look at the who’s who of local Boston sports and see who gets the most searches. For this I will plug into Google’s keyword search tool some of Boston’s usual suspects like: Tom Brady, Red Sox, Celtics, Patriots, Rob Gronkowski, David Ortiz, Mookie Betts, Zdeno Chara, New York Yankees (sadly yes), and let’s also put in LeBron James for a comparison.  Below are the results and it appears that the Red Sox and the Celtics reign supreme, but please keep in mind Google is taking these results just from the Boston area and these are the average results from the past 12 months of google searches. 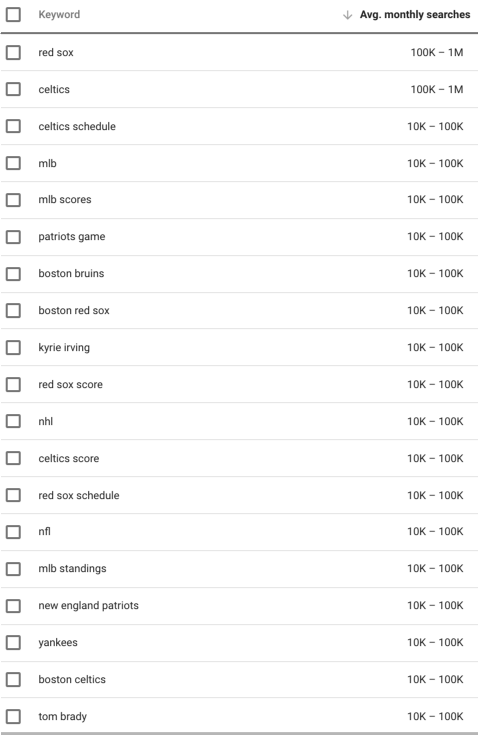 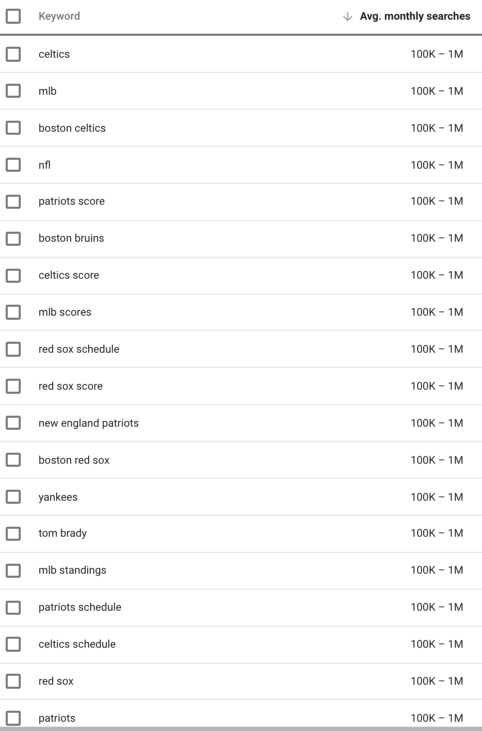 Clear to see here that our state has huge sports fans and that we of course keep an eye out on the Yankees. Below is a comparison of searches taken from Boston and I find this one particularly interesting as the bottom two athletes, Tiger Woods and Cristiano Ronaldo, undoubtedly have global fame and probably more accolades in their sports, but their popularity is nothing compared to our hometown hero Tom Brady. 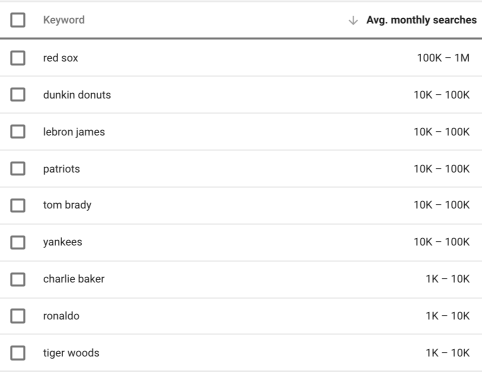 Hope you enjoyed this random post and seeing what fun one can have with Google’s keyword planner. I guess this is how an seo has fun:)

Not sure whether to use Google, Facebook or LinkedIn ads for your business? Curious how they compare on their average cost per lead, cost per click (CPC) and click thru rate (CTR)? This post will help you determine which is…

A Local Boston SEO Trick for Your Testimonial or Location Pages

OK, I am going to share with you a little local seo trick or hack as they say now to improve your local seo rank. I will use the city of Boston for this example since we are based here…